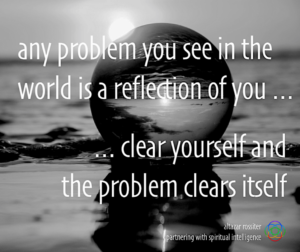 I’ve always found this self-reflection stuff challenging, which is the surest sign that there’s something for me to learn from it. I see some very ugly problems in the world, and I certainly don’t want to accept that they’re in anyway a reflection of me. BUT …

One of the important aspects of this phenomenon that I have learned, is that the reflection is somehow indirect. It’s distorted in some way … upside down, magnified, twisted … So I have to explore it and decode it, a bit like a clue in a crossword puzzle.

Perhaps one of the nastiest issues that I don’t want to consider in relation to myself, is the trafficking of children; the violation of their innocence and their disappearance on an almost industrial scale. Children are farmed for organ replacement, and for slaughter in ritual sacrifice. None of this can possibly have anything to do with me … can it?

I’ve often wondered what this says about the reality I live in. Considering that I might have anything to do with it shakes me to my foundations. But it’s clear that at some point the child I was “disappeared”.

The number of times I longed to be rescued, or wished I could run away are too numerous to mention. I couldn’t wait to grow up and take responsibility for caring for myself. This might have been a good plan except …

… In abandoning my childhood and the misery of it, I also abandoned the child in me that never received the love it required to grow into a coherent adult.

… Because the child I was concluded that adults could not be trusted, when I became an adult I became the enemy of my inner child. My adult self could not be trusted to make good on the promise of taking care of the child I had been when I was looking to leave my childhood behind. This is a particularly crazy self-sabotaging closed energy loop, that may be seen intellectually but not broken. It’s one of the root causes of self-doubt and mistrust.

… Also because I was FORCING myself to grow up as fast as possible, that FORCING neglected the needs of the child I was. AND SO, by default, I was an abusing agency, denying the child I was its existence, literally making it disappear.

And here’s the thing …

The staggering numbers of children that disappear every year and the extent and depth of their, exploitation, abuse and trafficking is an abomination that is gradually surfacing from the depths of darkness. Its ugliness is too gross for many people to even consider let alone look at.

And just maybe, that’s related to the damage we’ve done to the inner child that still lives in hiding in each of us. Is it possible that in disappearing my own inner child, I invalidate the right of the child I was to exist … and by extension invalidate the existential rights of children in general. Is this my contribution to the external phenomenon of missing children? It’s something I shrink from looking at … but it’s vital that I do if I want to grow beyond its influence and contribute to its elimination.