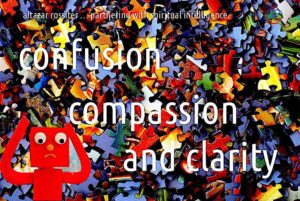 I was talking to one of my spiritual associates, my frequency family, the other day. And it became apparent that we’re living in an atmosphere of confusion.

We feel our own confusion, but because we’ve recognised our sensitivity to the collective we know that confusion exists around us too. And this prompted us to probe a little deeper into what we were sensing.

As a society we’re used to being told what to think. We’ve been trained into accepting what we’re told to think, and to create a story for our existence within that container.

That process right there gives us an identity. It’s been our security blanket. It’s given us a picture of the reality we inhabit.

So when what we’re told to think starts to lose coherence, confusion sets in. Our reality is destabilised – the picture disintegrates. This in turn triggers anxiety and a sense of being powerless.

What might be starting to manifest now in the general field of the collective is a sense of general confusion.

Over the last year and a half it’s become obvious that our governments and social institutions are lying to us. That in itself gives room for many speculative theories to arise over why. But what’s also been happening is anything that challenges all the lies has been rigorously censored.

Nonetheless, some of those challenges are leaking out. Serious co-ordinated and forensic analysis of the lies is finding its way into the general collective. The levels of institutionalised criminality and corruption foreshadowed are staggering.

This confusion is only just starting. It’s likely to get intense, as more of the truth dawns on people. And it’s why violent reactions are triggered if you insist on telling people the “truth” before they’re able to hear it, particularly if they’re stuck in an old picture.

Anyone on a transformational path of self-empowerment is very familiar with this kind of confusion. It’s an important stage in the transformation process that has to be given space, rather than skipped over, denied or pushed through. It’s where we learn to allow ourselves to be a mess and let clarity emerge from that mess.

It’s just possible that this is what’s starting to happen in the general collective. It’s getting messy and likely to get messier.

And we know it hurts.

We’ve made these shifts, sometimes on our own, sometimes with others holding space for us. Sometimes we’ve held space for others to move through their transformative process. And we know the paradox that clarity emerges, but cannot be found no matter how hard we search for it.

So now, one of the options available to us is to maintain our equilibrium, our balance – our zero-point consciousness – in the confusion.

There are certainly enough of us to create a compassionate psycho-energetic field where it’s ok to sit in the confusion. The potential is for that field to infect the general collective.

As we maintain our vibration of equilibrium and compassion in the confusion, we hold space for others to be ok within it. We facilitate the collective to shift through it organically.

I’m not saying that this is how it has to be, just that it’s a possibility. And we know that in our personal transformational process the clarity that emerges is always more loving, more exciting and more true to our well-being than we could have imagined.