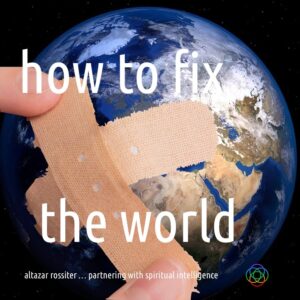 I knew the world was wrong from the moment I popped out of my mother’s body. I probably knew it while I was still in there, but the moment I was here it was clear.
I also knew I had to fix it. However, I had my hands full growing the body I’m in and learning to operate it. So fixing the world had to wait, but I knew it had to be done.
To cut a long story short, I developed ways of coping with the wrongness of the world. There was no way around this if I wanted to survive. I was here … and going back the way I came was not an option.
Pretty soon I was trained into compliance with the reality of my life circumstances. Basically, this amounted to learning to fear the imposition of something I didn’t like, so that I would be encouraged to do what others wanted. To go with what produced a calm response… I surrendered my sovereignty.
One of the founding principles of this surrender was that of victim. How few of us have any choice but to comply with a hierarchical form of governance… starting with the family and extending to ever larger institutional control systems.
All the time I could feel none of it worked for my general well-being, or anyone else’s. I might stand AGAINST the injustices I felt, but after a while the system always seemed to morph around any progressive concessions and maintain its dominance.
I became used to the normality of all of this. Either the struggle to survive was so intense, that nothing else registered; or life was ok enough that the underlying wrongness of everything could be tolerated. And the transition from the first of these states to the second was the main aim in life.
Underneath all of this were regressive fantasy implants. I would enjoy a blissful afterlife if I was sufficiently compliant in this one. Or, some hero is going to materialise from outer space to save us all and punish the wicked – one day.
This diminished paradigm of existence persisted in me until I was sick enough of my compliant self to find a way out, or give up on life altogether.
What I didn’t realise until long after that particular point was that the essential energy of the truth, the love, the light and the power I Am was being compressed. That was creating an internal pressure that would either cause me to explode catastrophically… or if I caught it in time, power me towards an empowered version of myself.
What I had to accept about myself, was that I was complicit in my victimhood. I had owned my victimhood as my identity. I had absorbed and gone along with all the control and disempowerment systems because it was convenient… and too uncomfortable to look at it and change anything.
None of it was a very pretty picture. I was actually programmed NOT to look at it. But it finally became too uncomfortable not to look. So I decided I would. I decided I would find and align with my true self… whatever that took.
I see the present world sickness situation as something similar, but on a mega collective scale. The old energy hierarchical systems of control and domination have been disguised as benevolent governments. But those disguises are less and less effective.
Maybe here’s an opportunity to understand our collective victimhood, but it means taking responsibility for it. At the same time as we take that responsibility we take another, which is far more significant.
In the moment we take responsibility for our victimhood we take responsibility for our sovereignty. We reclaim the sovereignty we surrendered through compliance with what went against our inner truth. We own it.
The first step is to decide to align with your true self. That decision has to be made from a place of total commitment, without having a clue about how it will unfold. However, in making the decision you also give your magic permission to reveal itself and start working. Now here’s how it works. Everyone has to make this decision alone and freely for themselves, WITHOUT insisting or expecting that anyone else does the same.
The inconsistencies in imposed [infection] control strategies are perfect for creating a collective awareness of the diminished paradigm of general existence. They make it obvious that hidden agendas are in play. At the same time they provide a pressure on the collective that has the potential to stimulate personal decisions of the kind described above.
This is not a matter of tearing down the system and replacing it with a “better” one. It’s about the energy that we provide for any system to sustain itself. When you decide and commit to aligning with the truth you are, you withdraw your energies from any system that doesn’t support that decision.
Without the collective sum of these energies the old systems simply collapse. A new reality is birthed through the collective, one that reflects the dominant vibration of that collective, which in turn is a synthesis of the vibration of each individual.
Maybe the world fixes itself. All we have to do is decide and take responsibility for our personal sovereignty.
Deel dit!