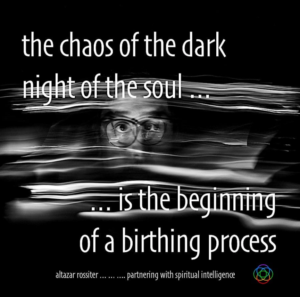 I remember my first “dark night of the soul”. And yes there has been more than one. They seem to be an intrinsic part of the personal transformation journey. But the first one was the most intense, perhaps because it was an experience that nothing could prepare me for.

I was in complete mental and emotional melt-down. Everything I was familiar with in an everyday normal sense of things lost its significance. I could barely function. My mind was spinning. I didn’t know who I was, what I should do or what anything meant in the world.

Of course, I was overstressed and burned out. And the everyday normal thing to do would have been go to my doctor and get some medication … so I could carry on fitting into my version of normality.

The trouble was my version of normality was a form of existence, rather than a life. Getting a course of medication was not going to put anything right. It would only support me to continue going through the motions. I would be effectively dying slowly, disconnected from anything that could give my life real meaning. And THAT would have been the “normal” thing to do.

But I was not “normal”. In fact I really understood at a deep level that, for me, the old “normal” was a sickness.

I chose to avoid the medication offered … [in this case anti-depressants] … and began to accept myself as the misfit I was. I decided to stop pretending I was happy with “normal”, or that it had any validity for my soul.

I had to let go of everything that I thought I knew. I had to let myself crack open to let the real me out. It was a very scary process, but I found a sanity that gave my life real meaning. I chose to change myself … and my reality changed with me.

All of that taught me that chaos is not the end of everything. It’s a beginning of a birthing process.

For me it was an initiation into the truth of who I am. To resist that I would have had to live in a self-destructive depressed state, reliant on medication to enable me to function. I can’t know how that would have played out, because it’s not the direction I took.

I can see many parallels between my experience and what’s going on in the world right now. Time will tell if the human world will emerge intact from the chaos of this particular dark night, which seems to be imposed uniformly throughout what we call the “first world”.

The reality we’ve inhabited comfortably since the second world war is being turned inside out. “Normal” is never going to be the same. Something has to crack. It’s time to let the light in.