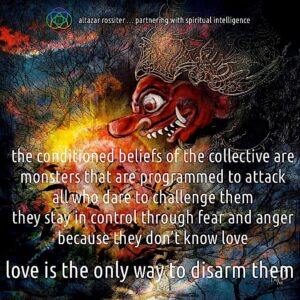 I was a psychically sensitive child. I could feel and sense things, beings, entities that everyone else told me were not there. But what I sensed scared me.

Eventually I allowed myself to believe what I was told and I learned to disregard my psychic sensibility. At best it was inconvenient. At worst it occupied me with information that left me terrified, because I had no frame of reference that enabled me to cope with it.

It wasn’t until I was well into adulthood that I realised the significance of that sensitivity. I’m now very aware that the phenomena I sensed as a child were … and are … very real.

It is STILL rejected as imaginary in the everyday conventional world. Yet that world is [perhaps] under the rampant influence of some of those invisible entities that few are aware of.

A few years ago I discovered that there’s a word for these entities.

The word is EGREGORE … I invite you to look it up.

There’s a rich pagan tradition that recognises the spiritual nature of everything, and the existence of many kinds of spirit beings … not all of which are benevolent. This awareness also persists in most indigenous cultures. It has been all but obliterated by the dominator ideologies of the modern world.

At one level the word EGREGORE represents an “… autonomous psychic entity composed of and influencing the thoughts of a group of people.”

At a deeper level, an EGREGORE is the “… conduit for a specific psychic intelligence of nonhuman nature connecting the invisible dimensions with the material world in which we live.”

In the context of the survival of belief systems [including dominator ideologies] egregores may have considerable importance. Their behind the scenes existence is implied in the way many social control systems operate … and how those systems develop a life of their own with a ferocious demand for compliance rooted in fear.

These systems collapse when we withdraw our energies … our consent. This starves the egregores that support them out of existence. That triggers a survival fear which is then projected onto the human collective.

Our primal instinct is to run from fear [fight / flight / freeze reflex]. That’s what gets hijacked by the egregores to keep us under their control.

The psycho-energetic mechanisms of this process are complex. They maintain a vibrational frequency that augments and sustains the controlling egregores.

The way out is to look at our fear … embrace it … and love it … the last thing the egregore wants us to do. Because when we do this we can see what’s ours … what’s real and what’s not. And our love is the force that transmutes it